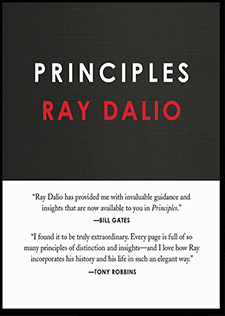 If you’ve never heard of Ray Dalio let’s have a quick introduction. Ray Dalio founded one of the world’s largest hedge funds, Bridgewater Associates. After reading a couple articles and watching YouTube content on Ray, I decided it’s time to dive deeper beyond the surface and find out what information created this behemoth.

Ray Dalio, born August 8th 1949 started with very humble beginnings in Queens, New York. Born to a Jazz musician, Dalio did not inherit any of his wealth. At a young age Dalio took interest in investing, at the age of 12 Ray purchased $300 of shares of Northeast Airlines. When the Airline merged with another company, Ray walked away successfully tripling his investment. This was the gateway of much greater events to unfold in Ray’s life.

After obtaining a Bachelor’s in Finance from Long Island University and an MBA from Harvard Business School Ray went on to work on the floor of the New York Stock Exchange investing in commodity futures. At the age of 26 Dalio founded Bridgewater Associates, which holds over $160 Billion in Assets. According to Forbes, Ray Dalio is the 30th wealthiest person in the United States and 69th wealthiest person in the world with a net worth of $15.2 Billion (October 2014).

Ray holds several principles of living to which he attributes his success. Most notably Ray Dalio attributes a major part of his success to meditation. In an interview with The New York Times, Dalio shared that he meditates daily with often up to two 20 minute sessions. This has been a habit of Ray’s for over 45 years.

When questioned by the interviewer “You meditate for 40 minutes a day?” Dalio laughingly replies, “It’s such a great investment.” Ray describes how meditation brings to his life equanimity and creativity.

In today’s hyper connected world it takes an increasing level of focus to stay on track through the never ending emails, text messages, misinforming media blasts, and social media notifications among so many others battling for our attention.

I will gladly admit that I too struggle from maintaining focus on what’s most important versus the daily fires that just happen to pop up ceaselessly. I think it would be safe to say that we can all benefit from additional creativity and focus in our day.

To start off, what exactly is Meditation? Let’s get a definition from the U.S. Department of Health and Human Services, National Institutes of Health (NIH) below;

“Meditation is a mind and body practice that has a long history of use for increasing calmness and physical relaxation, improving psychological balance, coping with illness, and enhancing overall health and well-being. Mind and body practices focus on the interactions among the brain, mind, body, and behavior.”

Now, we know meditation has been credited with bringing mental and emotional wellness, but is there any factual evidence behind this? While there are many factors involved in answering this question, the simple answer is yes.

“The first study looked at long term meditators vs a control group. We found long-term meditators have an increased amount of gray matter in the insula and sensory regions, the auditory and sensory cortex. Which makes sense. When you’re mindful, you’re paying attention to your breathing, to sounds, to the present moment experience, and shutting cognition down. It stands to reason your senses would be enhanced.

We also found they had more gray matter in the frontal cortex, which is associated with working memory and executive decision making.”

If that’s not amazing enough, a second study was conducted with individuals who had never meditated before in their lives. This group practiced meditation daily for 8 weeks (an average of 30 minutes daily). After just 8 weeks of meditation brain scans showed these individuals had more brain volume in 5 major parts of the brain responsible for a wide variety of functions. Here is a link to the full article from The Washington Post.

After reading this information on the benefits I will definitely be making a conscious effort to begin meditating again (As I hope the same with you!). I have meditated in the past and have fallen off the practice. However, I can attest to an increased sense in well being throughout the day when consistent with meditation.

How do you meditate? Easy, find a relatively quiet place (indoor or outside) and just focus on your breathing. YouTube also is a great resource for the basics. Remember, it’s not about being so far out there and becoming disillusioned. Rather, I share this with the hopes that you receive more focus, grounding, and clarity to operate productively each day moving closer towards your goals.

Until next time, keep pushing and progressing.