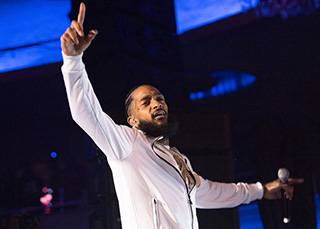 With no question, Nipsey Hussle is rippling waves of inspiration across the globe with his latest and first official studio release, Victory Lap.

If you don’t know who Nipsey Hussle is, you’re in for an amazing journey with this one. While there are several lessons to be learned from the journey of Nipsey, we will be focusing on the inspiration from this man’s work ethic, belief, and consistency while on a Marathon.

As a young man growing up in the Crenshaw District of Los Angeles, Nipsey Hussle ran the streets earning respect and credibility as a Rolling 60 Crip. While the gang life is something not to be taken lightly or glorified, Nipsey held his own in that world with respect and honor.

Although the money was good from the Hustle, Nipsey had aspirations and the intelligence to make a bigger impact on the world. However, like we all face, those tough times came to test Nipsey’s faith. Nipsey made a difficult decision to fully invest in his endeavors as a musical artist, cashing in on all his alternative ventures to build a music studio. This meant sacrifices had to be made. Going from being that well known guy with all the resources, cash, connections, and other levels of notoriety to diligently locking in on his art and craft.

While already in such a mode of sacrifice and discipline, the next wave of tribulation hit when the FBI raided Nipsey and his older brother, Blacc Sam’s studio with allegations leading to the seizure of all the expensive equipment they had invested in. To add to the loss of all the studio equipment, Nipsey was now left to figure out how to fight the pending legal case he was facing.

Wow, talk about a tough time really testing a persons character. I believe it is these trials and tribulations we face that determine whether we fall and stay down or make the decision to get back up and keep going which truly payoff in the long run.

Needless to say, Nipsey chose to keep going on his marathon. Catching the radio’s attention with his hit song, “Bullets ain’t Got No Names”, in 2008, Nipsey ended up signing a deal with a major record label. However, this deal did not last and left Nipsey to pursue his goals on his own as an independent artist.

Nipsey was blessed to beat the legal case and return to pursue his path with freedom. Back to the drawing board to start all over. While most of us can identify with having worked so hard for something just to have it all taken and start from scratch, it’s what Nipsey did next that planted seeds now blooming into full fruition.

No, it was not a major record label that came down and saved Nipsey from the situation he was in. It was through his own discipline and work ethic that he began self-releasing timeless works of art ranging from The Marathon, The Marathon Continues, Mailbox Money, Crenshaw, to other amazing releases which allowed his preparation to meet his opportunity now surrounding his latest release, Victory Lap.

While writing this I can’t help but think about the time I had a chance to meet Nipsey Hussle. Having been a long time fan of Nipsey’s I had to take the opportunity that presented itself in an admittedly less than finessed manner back in 2014.

While pulling into the Houston’s restaurant parking lot in Manhattan Beach, CA I spotted Nipsey hopping into his black Mercedes CL 600 with a friend. I asked a waiter smoking a cigarette in the parking lot, “was that Nipsey Hussle?”, she replied, “oh yeah, he’s here all the time.” I put the car in park and exited the vehicle, engine still running sitting in the middle of the parking aisle.

I headed over to the Mercedes to greet Nipsey like a 5 year old kid meeting Santa Clause for the first time. Having already entered the vehicle and backing out I took a chance and knocked on the passenger side window. Unsure as to what I had wanted Nipsey rolled his window down. I greeted Nipsey with a smile and let him know how much myself and my brother have been inspired by his projects and movement. Nipsey laughed and shook my hand appreciating the love and respect shared. Real cool and genuine dude.

If there’s one thing we can all learn from Nipsey, it would be to always have a vision that you’re working towards, on a marathon. Instill military like discipline and work ethic towards your goals, through the good and tough times. Always show others respect and you’ll be respected at the highest level.

I ordered the physical CD of Victory Lap from Amazon, which is a rare find these days with music going strictly digital. I highly recommend you grab yourself a copy of Victory Lap to feel a truly inspiring journey shared by one of the realest, Nipsey Hussle.

Until next time, keep pushing and progressing.