How To Stay Grounded Through Massive Success With Tilman Fertitta 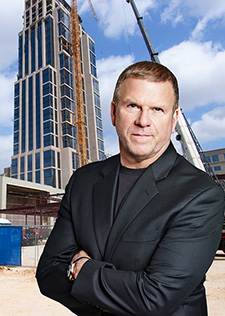 Now if you don’t know who Tilman Fertitta is, you’re about to find out. Tilman Fertitta is the mogul and sole owner behind the Landry’s Inc. Landry’s is a conglomerate of several well-known restaurant brands including the Morton’s and Mastro’s steakhouse chains, Rainforest Café, Bubba Gump Shrimp Co., Claim Jumper, Saltgrass, and several others just to name a few. If that wasn’t impressive enough already, Tilman Fertitta is also the owner of the Golden Nugget Casinos located across the US. You can currently catch Tilman on CNBC’s Billion Dollar Buyer, where he invests into up and coming ventures.

Tilman’s current $2.8 Billion net worth comes from very humble beginnings in Galveston, a port city located just outside of Houston, Texas. Fertitta’s father owned a seafood restaurant where Tilman would get his first taste of the restaurant business at a young age. At the age of 8 Tilman would carry his grandfather’s briefcase around with him telling everyone, “one day I will run my own business.” Well, Fertitta has accomplished his goal several times over, currently operating over 500 restaurants and various establishments across the country. Fertitta’s formal education comes from attending Texas Tech University as well as the University of Houston to study Business Administration and Hospitality Management. Tilman immediately took to applying and developing his knowledge in his own construction business which led to his first major project, the Key Largo Hotel in Galveston (Founded 1984).

While operating his construction business at the age of 26, Fertitta acquired two Houston-area restaurants, Landry’s Seafood and Willie G’s, both originally owned by the Landry family. By 1986 Fertitta bought out the Landry brothers, taking the company public as its sole owner in 1993. After going public, Landry’s Inc. grew at a rapid succession adding several restaurant brands to its holdings. Landry’s Inc. went from a valuation of $30 million in 1993, to more than $1.7 billion by 2011. Fertitta, who already owned a majority of the Landry’s stock went on to purchase all remaining shares in 2011. Landry’s Inc. and its 500 plus restaurants united under the full control of sole owner Tilman Fertitta.

Since reaching such success in the restaurant industry, Fertitta has further expanded into hotels, casinos, amusement parks, and casinos. Fertitta was also one of the original investors in the process of building the Houston Texans as an NFL team. Currently, Tilman stars in the Billionaire Buyer on CNBC where we get an inside glimpse into just how disciplined of an investor he can be.

With all this success, it is likely that one may be wondering, how does someone stay so driven after already having done so much? Tilman’s formula is simple, through the good and the bad don’t change. Yup, Fertitta maintains a grounded perspective and never fails to remember who he is and where he came from.

In a 2016 interview with ABC 13 news, Fertitta stated, “It’s nice to be important, it’s more important to be nice,” Fertitta said. “Everybody’s going to have a microscope on you and where there’s a lot of perk for being you, when things go bad, it goes the other way for you, so make sure always hold yourself out and make sure you conduct yourself real properly all the time.”

This statement alone speaks volumes of how important it is to stay humble even as you attain major success in life. Just as fast and loud as the praise comes in when everything is going right, the opposite holds true when the waters turn choppy as they unfailingly do. By maintaining a solid grounding to who you are and your core values, you remain steadfast and unwaivering through all experiences that come along with success.

“I haven’t changed at all,” said Fertitta. “The little details that bothered me 25 years ago still bother me today. If I’m walking through a property, I’ll see trash on the floor, I’ll still pick it up — I’ll walk back in the kitchen and say hello to everybody, so the biggest thing about being successful is don’t change.” (Interview with ABC 13 news, June 2016).

Fertitta is an amazing example of how money does not, or should not change people. Rather, money provides one the opportunity to further serve others. Tilman Fertitta has gone on to further develop his hometown of Houston, Texas while maintaining a front sight focus on his core being. With major success comes major responsibility. While I wish you the greatest successes in life, I hope you always stay grounded to the roots of where you grew from.

Until next time, keep pushing and progressing..